Went to APPLEHEAD with Dolor this weekend for the final mix. Engineer Chris Bittner was at the controls. We spent the first few hours putting together all the tracks from the various tracking sessions and getting them all routed to channels on the consoles. We used the API for the drums and the Neve Sidecar for the vocals. Guitars also went through the API and bass was routed through the Trident and summed there befor going to the API. We compressed the Bass sum with an EL8 Distressor, as well as the snare. We used various other compressors and processors and by lunch time the tracks were sounding great. Band Manager Phil Lorito dropped in for a listen and to give a "pep-talk". He stressed the importance of having the vocal out front. After a discussion with him I decided that we would make stems (Stereo Track Element Mixes) in addition the the Stereo Mixes, so that I would be able to "re-mix" the vocals to the music at any desired balance level. The session went really well. Chris did an outstanding job mixing six songs in two days. Here is a short film of Chris throwin' down the quick mix.
Posted by Kol Marshall at 11:11 AM No comments: 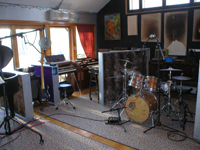 Two years ago I had the opportunity to spend a week at Leopard Studio while owner Jimmy Goodman was away (see: 02.24.2005 “Some Fun Of My Own” below). I used the time experimenting with vintage recording techniques and gear, and I recorded basic tracks for three psychedelic era songs. At the time I had hoped to return at some later date and finish the songs, but I never did. I had since decided that it would be better to apply some of the same techniques to something new. When Jimmy asked me to stay again this February I jumped on the chance. I brought over some of my favorite vintage stuff and set up for ten days of old school album tracking. 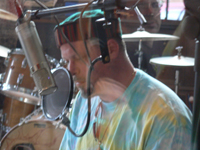 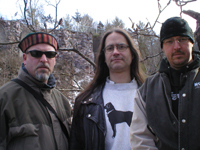 The first weekend my friends Loudmouth Bill and Mr. Kane joined me and we sketched out several songs, each based loosely around grooves and progressions copied from the album “More” by Pink Floyd. Bill, Kane and I each recorded some spoken word stuff. We used a Lawson L47 and the Avalon 737 Preamp with some compression. Mr. Kane also sang on a couple of the tracks. By the end of the weekend we had eight songs.
After they left I spent a couple of days adding guitar and bass tracks, using the sketches which had been done to a click as the foundation. I ran my Altec 639B Ribbon Mic through one of Jimmy’s vintage Neve 1272 preamps and used it in several placements on two vintage Ampeg guitar amps, a Gemini I and a GU-12. I played my ‘74 Fender Telecaster, and got some great tones. Bass amp also an Ampeg, the B15 mic’d with a Senmnheiser 421 through another Neve 1272, and of course a vintage bass, my ‘74 P-Bass.
Later in the week drummer Larry Lubkurt came out and replaced all my bad drumming with excellent performances, which brought these recording to a whole other level. Larry is pro and vary talented. He came up with parts on the spot for eight songs he had never heard before, and it was awesome. I was glad I had taken the time to mic the drums in a more modern way than the crude 2-mic technique I had used on the covers recorded two years ago. I used my Electrovoice kick drum mic ND-868, and the Octava MK-219 on the snare, a pair of Rode NTK tubes for overheads, all using API 312 preamps. On the toms I used Sennheiser 421s through Neve 1272s all around. The Lawson L47 was still running through the Avalon so I used it for the room. The drums sounded amazing.
I spend the second weekend adding a few parts and mixing. Loudmouth Bill and Mr. Kane got to hear the final mixes the following week when I posted them on a hidden page on our website. The page is no longer hidden and here’s the link: More Pink Pigs Head
Posted by Kol Marshall at 11:11 AM No comments: 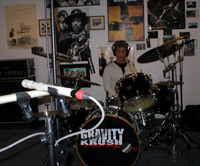 This month I began pre-production with GRAVITY KRUSH. I first heard these guys at The Chance Theater in Poughkeepsie. They have a great power-pop sound with solid grooves and excellent vocal arrangements. I attended some rehearsals and helped them choose songs for the project and identify the tempos. Then, after making click tracks in ProTools, we tracked scratch guitar and bass tracks for the drummer Pete Roan to record to. I also recorded Pete, pictured here, playing along to the pre-production tracks. I left the band with a copy of the pre-production sessions to practice to. We’re planning on beginning to record in March.
Posted by Kol Marshall at 11:11 AM No comments: