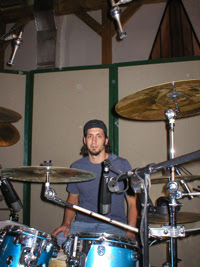 After a summer filled with more hiking than mic'ing, I'm back in the studio with COLDSHOT. Readers of this blog may recall the unfinished project we began in 2006 before the band relocated to the state of Florida. After some major personnel changes the band has emerged as a leaner and meaner 4-piece combo. Remaining from the old line-up are drummer Mike Lew and bass player Darren Barhydt, who journeyed back to New York last weekend to record drums for 10 songs. Many of these songs are new compositions and a couple of songs are re-worked versions of songs we recorded in ’06.
As usual Chris Bittner of Applehead Recording Studio was instrumental in helping us get the drum sound that we went there to get. Unlike prior sessions I’ve brought to Applehead, we opted to use the API console preamps for the close drum microphones and the Neve inputs for the room mics. It was a good choice. The drum sound is fantastic. Lomo tube mics were used as overheads, Stereo pair of Geffels in the room plus my Groove Tubes MD-1 as a distant ambient mic. Up close I used my Electrovoice ND-868 inside the kick along with the studio’s U-47 FET outside. On the snare we started with a Beyer 201 on top and an AKG-414 on the bottom. I liked the sound of the 201 at first but I began to notice the snare would occasionally sound a bit “boxy” so we switched the top mic to a Shure SM57 which had that classic midrange signature and worked better in the mix. Sennheiser MD-421 on all the toms, an AKG C-451 on the hat, which was great but crapped out halfway through the session and had to be replaced with an Shure SM81. Also used an SM81 on the ride. Mike Lew was admittedly a bit nervous at the start of the session because our goal to track ten songs was a bit ambitious, and we took out time on day one getting the drum kit sounding it’s best and tweaking the microphones and headphone mix. Once we got started tracking though he found it easy to perform because his sound was great and as a result he really got comfortable and got into a groove. We tracked six songs on the first day and four more on day two. Mike’s takes were very solid and we only asked “The Man In The Hat” (Beat Detective) to fix a few minor things. By early in the evening Sunday we were done tracking. We listened down to everything once more to be sure there was nothing we had missed, and then as assistant engineer Jesse broke down the room mics Chris and I set up to get a good drum STEM mix for the overdubs to be tracked to. The tracks ran back through the API desk and I did some EQ and compression on the tracks and got a really nice mix without any digital processing or effects. We ran the mix through the API 2500 Stereo Buss Compressor, which I asked Chris to tweak, and it sounded awesome. Monday morning Mike and Darren were on their way back to Florida with their sessions on a DVD and a reference CD to help keep them awake.
Posted by Kol Marshall at 11:11 AM No comments: