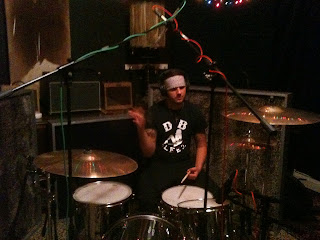 Swung back by Leopard for a couple of hours to add some overdubs to Lydia Kavanagh's song "It's Christmas". Her original demo was sparse, and wonderful that way, so I didn't want to over do it. The demo had a synth piano doing the main accompaniment and a Melodica doing a counterpoint. The synth piano had a bell like quality that the real acoustic piano lacked, so I layered some of the same notes the piano plays with vibes. Used Leopard's Lawson L-47 tube mic through the Avalon VT-737 for the vibes, which gave it a very rich bell like sound. Also added a faint Glockenspiel part. Then I moved on to that counterpoint melody.
Although I do have a Melodica, I decided to try the part on the Hammond B3. I used the same three mics I had used on the piano. the two 414's on either side of the Leslie, and the Sennheiser kick mic on the B3's internal speaker, the 414's through API 312 mic pre's and EL8 Distressors as before, This produced a very full sound. Took me a few takes to get the right feel, using the leslie ramped up and down for accents. Once I'd gotten the part down I went back and overdubbed the bass pedals (I probably looked pretty silly crouching on the floor playing them with my hands, but I'm no organist, and hey, I was alone).
Finally I added some very simple percussion, a shaker and a Tamborine, not throughout, just in places. Satisfied I headed home to play with some rough mixes. I've sent them off to her and am awaiting feedback. I like how the mixes sound, but honestly I wouldn't be surprised or upset if Lydia decided to just stick to piano and vocals because the song is really so good it needs nothing else.
Posted by Kol Marshall at 11:11 AM No comments:

Worked with Lydia Kavanagh (of Golden Palominos) on a beautiful Christmas song she wrote called "It's Christmas" at Leopard Studio over the weekend. The song is so moving, both joyful and mournful, really tugs at my heart strings.When she first sent me her demo of this song, it's beauty actually brought tears to my eyes.
After picking her up at the train from the city we drove out to Leopard, arriving shortly after noon. The primary accompaniment for the song is piano so I set up a stereo pair of AKG C414s under the piano lid in an X-Y placement and I put a third mic, a Sennheiser underneath the sound board. All the mics went to API 312 preamps. The 414's were also mildly compressed through the Distressors. It had been so long since she had recorded the demo that we had to re-learn the piano part. There was some debate as to whether or not to play to a click track, beacuse of several tempo retards during the song. Lydia played through it without a click, and then I learned the parts and played through with the click, mindful to retard insomuch as possible with the click. We decided to use my piano track so that we would have option of using the tempo grid's editing options later.
Next I set up for tracking Lydia's vocals. I choose a Neumann TLM103 and patched it to the Avalon VT-737 with mild compression and no EQ. Lydia's voice doesn't need any help, really. She always sounds wonderful and the Neumann sounded very natural on her voice. We ran through the lead vocal track a few times and then listened to the various takes, taking notes of which takes we liked best. Once we were both happy we'd got it I made a comp track from all the best bits, and we moved on to backing parts, which went very quickly.
We were about to break for dinner when Lydia noticed that her dog (a darling little cockapoo) that she'd brought up with her, was acting a bit listliss and disoriented. We were both gravely concerned, so I rushed them both to the vet's office. Turns out the poor pup had gotten into something toxic while romping in the yard that afternoon, perhaps some rotting compost or a poison frog. It ended up being a long and difficult night for us all, with her dog needing overnight hospitalization. It turned out OK in the morning though. Doggie's fine. I brought them, both exhausted, back to the train and then headed back to the studio to to a rough mix, backup the files and tidy up the studio.
We may add some counterpoint or rhymical elements at a future session, but the song is incredably powerful on it's own and could easilly stand on that alone.
I have to say that despite the doggie drama it was a wonderful session. I have known Lydia since we were in high school together, had worked with her before, many years ago, and have wanted to work with her again ever since. Many thanks to her for making the trip upstate, it is truly an honor and a privilage to get to work with her on such a beautiful project!
Posted by Kol Marshall at 11:11 AM No comments:

I've been reading Tape Op for years, and have always respected editor Larry Crane for his skills and his opinions. This current issue, #84 has both opening and closing statements which I would like to publicly applaud, and if I may dare, add a thought to.
On the contents page Mr. Crane always writes an intro, and in this issue he writes of the joy of working with good musicians; "Getting to work with players that intuitively understand and support a song with their abilities is a treat. At times I've felt privy to the best 'private performances' I'll ever see from my favorite artists". He closes the intro saying "I feel lucky." Yeah, Larry, I'll bet you do! Having polished more than a few turds myself, I certainly share your affinity for recording real talent!
He also closes every issue with a column he calls Larry's End Rant, and in this issue, in a piece titled The Big Misconception he rails on journalists who espouse the view that "anyone can make a record on their computer at home nowadays." He explains how a laptop and cheap audio interface are hardly all the tools actually needed to make a great record, which is largely true. The quality of the audio interface's digital converters has a huge impact on the quality of your recordings, as does all the elements of the front end (i.e. the mics, microphone preamps, etc). He goes on to talk about the room acoustics, monitoring, and so on, and also mentions having the skills to use these tools. He almost forgets to mention the importance of having "some amazing material" and "players and singers that can perform it."
This brings me to the thought I would like to add.  I understand the point of this article is to say that you  can't actually do everything on your little computer that it used to take a whole studio to do, so don't believe it when you read that in some other trade publication. Agreed. Ultimately, however, performance trumps it all in my opinion. In light of Mr. Cranes opening statements in the intro I would like to emphasize that at the heart of it all, what we're really in this for is great music, and great music does not require a $10,000.00 Telefunken microphone or the worlds most expensive digital converters, what it requires is great writing and great musicians.
Case in point: The Complete Recording Of Robert Johnson. The only recordings of Robert Johnson's music come from two sessions: three days in a hotel room in San Antonio in November of 1936 and two days in the back of a Dallas office building in June of 1937, using the most minimal of equipment, which was all that was available at the time. Eric Clapton has called Johnson "the most important blues singer that ever lived." These recordings are not technically stellar by any stretch of the imagination, in fact they sound awful. There is even some debate if the speed and pitch are correct. These facts not withstanding this is considered by many to be the greatest Mississippi Delta Blues ever recorded.
My point: performance transcends the recording. Period.
Posted by Kol Marshall at 11:11 AM No comments: