Java came up to my place for the weekend to track some overdubs. I had recently set up a somewhat impromptu studio in the guest bedroom at my house, and this was the first time I had a chance to use it. The room has an angled roof and nightmarish acoustics, which I had to tame with copious amounts of studio foam on the walls and ceiling. It seemed to work out well, and we got a lot accomplished. For vocal overdubs I used the Neumann TLM-103 through the Vintech 1272 preamp, compressed lightly with a DBX 160A. I also used the Neumann for acoustic guitar overdubs along with a Shure SM-81, also through the Vintech and DBX. I placed the Neumann near the bridge for a full-bodied sound and the Shure where the neck meets the body for a brighter sound, and Java's wonderful vintage Gibson acoustic guitar sounded great with these combined. We also did some electric guitar tracks, Java again playing my Telecaster through the Ampeg Gemini I, miked with the SM-81. Java also did some keyboard tracks, playing my newly acquired vintage Whirlitzer electric piano. Mid day Sunday our friend Bob Plotkin came by to add some violin tracks. We worked together on string arrangements for a couple of the songs, and Bob also did some improv stuff. His violin parts added a whole new dimension to several of the songs. I used the Neumann, Vintech and DBX on his violin as well. Bob was kind enough to snap some pictures of the session. After they left I spent Sunday evening doing some pre-mixing. Java hopes to have the project finished in January. Visit his site www.javajel.com 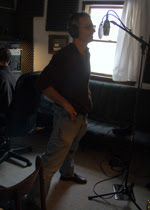 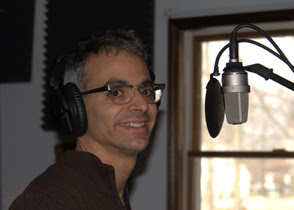 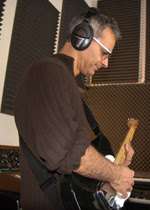 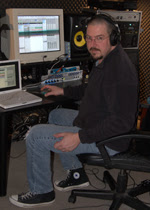 Posted by Kol Marshall at 11:11 AM No comments: 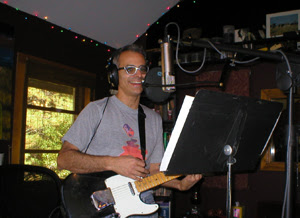 My weekend tracking session with Java Jel at Leopard Studio went really well. Java and I are actually highschool buds. I recorded his first demo like 20 years ago. Java plays guitar and sings. His songs are catchy and kwerky and funky and fun. Java has had a long career of writing and performing and has recorded with several bands, one of which I got to record at a studio in Dobbs Ferry several years ago. I'm really excited about producing an album for him. Day one was certainly productive. In the first hour or so we recorded an eight song live acoustic demo. I used Leopard's Lawson L47 for vocals, though it did pick up pleanty of guitar as well. Pre-apmed and compressed with the Avalon. I suplimented the guitar "bleed" with a Shure SM7 on the guitar, which got a round tone and very little vocal bleed. The combination sounds great. I also had a stereo room mic pair of AKG C-414 set up and I tracked those as well for some natural room ambience. At about noon drummer Larry Lubkurt arrived to meet Java for the first time. Larry played Leopard's house kit which I mic'd with a similar approach to how I'd previously recorded that same kit with the Anderson brothers. I used two Neumann TLM103's for overheads as before, as well as the Oktava 219 on snare, but in the kick I used an Electrovoice ND868. All four mics went through API 312 mic preamps, kick and snare were compressed with EL8 Distressors. I also used two AKG C-414's for stereo room mics placed in front of the glass. Room mics went through the Neve 1272's. I set Java up in the control room with the Lawson L-47 and my vintage 70's Fender Telecaster. The guitar amp was in the lounge, my 1963 Ampeg Gemini I, with the Shure SM7 off-axis at the grill. The tone I got on the guitar was wonderfully round but at the same time raw. For a couple of the songs I cranked the amp for more grit. 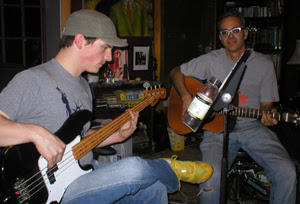 Java cut scratch vocals in the control room as he cut a rhythm electric guitar track. He taught Larry the songs along the way, and we did a couple of takes of each of 12 songs in about six hours. Shortly after Larry left bass player Mike Hamel of DOLOR arrived to cut bass tracks. He learned and recorded 11 of the 12 songs in just about 3 hours. Both Larry and Mike came up with great parts and the spontinaety of this production approach gives the recordings a realy great live feel. Both of them are great guys who I've worked with before, and they're outstanding and gifted players. They both hit it off well with Java and the groove really jelled (sorry, I couldn't resist). Now with a good basic rhythm section down I can work with Java on lead vocals and guitar and keyboard overdubs. We'll pick up on that in November.
Posted by Kol Marshall at 11:11 AM No comments: 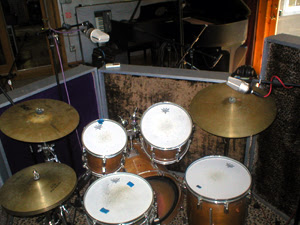 This session stands out as being the most relaxing and enjoyable session I have ever done. To be fair, the fact that I have known these guys since before we were ten years of age may have had something to do with it. What really made it special though was that this was a non-commercial venture, and we were all there by choice to enjoy (and record) some Free Jazz.
This is a genre that for many is an acquired taste, but as performed by this quartet I found it very tasty. Fred and Sean Anderson, identical twin brothers are the core of this group playing drums and woodwinds respectively. Fred played Leopard's house drum kit, a vintage be-bop style set, which I mic'd in a traditionally minimal fashion with two Neumann TLM-103's for overheads; one placed in front of the kit and facing down at the snare, the other placed above the floor tom, but equi-distant from the snare. I also placed an Oktava 219 condenser on the snare and I used my vintage AKG D12 in front of the kick. All the drum mics went through API 312 preamps. I compressed the kick and snare slightly with Empirical Labs Distressors.
Sean plays both alto and tenor sax, clarinet, flute and an assortment of exotic instruments. For his saxophones I brought out my Altec 639B "Birdcage" ribbon microphone, and for the clarinet I set up a Neumann KM-183. Trumpet player Lex Samu played in front of a Sennheiser MD421, and rounding out the bottom end was Chris Lough on upright and electric bass. I used a Shure SM7 microphone for both his upright bass and for the studio's Ampeg B-15 bass amp, and I also took a DI. The bass mic ran through Leopard's Avalon VT737.
Having had the previous weekend in the studio to set up and test mics, preamps and settings, I was ready for the group to pretty much just walk in and play. They seemed relatively unaware that a recording was even being made, with only Chris monitoring through headphones to better hear his acoustic bass. The vibe was very chill and the music was very intense! For more on this unique group visit http://www.myspace.com/andersonmodernmusic
Posted by Kol Marshall at 11:11 AM No comments: