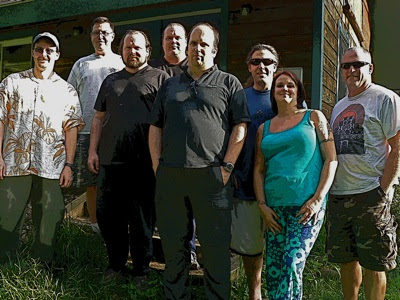 Throughout 2010 I've been working on an Umour production, (see www.umour.org) with a core group consisting of myself, Em, Lopudmouth Bill and Kane. We've joined forces with Fred and Sean Anderson of Anderson Modern Music on drums and woodwinds, Chris Lough on bass with Leigh Ann Lough doing some vocals, and Lex Samu on trumpet. Also joining us for a few tracks of vibes is Jimmy Goodman of Leopard Studio, where we've been recording. The music is sort of a lounge/jazz/rock album from a nostolgic era that never existed. It's a concept album with a story line and charactors and many elements are intended to be used in a video trailer for a film that never gets made.
We started off in March of 2010 doing basic tracks for the first batch of songs. I had put together some scratch tracks over loops of some of the vintage lounge jazz I'd been listening to, and we built our songs from those spontainiously in the studio. Also joing us at this first session were Bob Plotkin on violin, Steve "Java Jel" Gelsi on piano and Mandolin and Jeff Carter on guitar. We spent a weekend at Leopard and came away with a lot of great material. Some of the tracks were fully hashed out songs and others were instrumental pieces with vocals and other instruments to be added later. I did many of the overdub session at various locations with my mobile rig. In August we went back to Leopard Studio for more basic tracking and to date the project consists of over fifteen songs. Editing ond overdubs continue, and although we have no real deadlines I hope to have it finished before the spring of 2011.
Posted by Kol Marshall at 11:11 AM No comments: